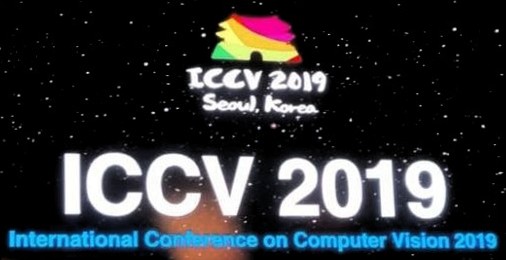 The ICCV attracts the interest of a large number of scientists and researchers from all over the world, who present their recent advancements in fields related to computer vision. Also, it appeals to large companies, such as Google, Facebook, and Microsoft, but also well known universities from academia, such as Stanford University, MIT, and Oxford University.

This year’s event was chaired by Kyoung Mu Lee, Prof. at Seoul National University, David Forsyth, Prof. at the University of Illinois at Urbana-Champaign, Marc Pollefeys, Prof. at ETH-Zurich, and Tang Xiaoou, Prof. at the Chinese University of Hong Kong. In total, the ICCV 2019 counted 7,501 attendees, an increase of 2.4 times over the previous edition ICCV 2017. It received more than 4,300 papers (double the number of submissions received by the previous edition), of which 1,075 papers were accepted for publication (an acceptance rate of ~25%), and 200 papers were selected for oral presentation (just 4.6% of the submitted papers).

MeVer researcher Giorgos Kordopatis-Zilos presented our work with title ‘ViSiL: Fine-grained Spatio-Temporal Video Similarity Learning’. This work was developed within the WeVerify project. The main objective of this work is to devise a function that, given two arbitrary videos, generates a similarity score based on their visual content. This is the core functionality for a reverse video search system, which is often an essential tool for the task of media verification. More precisely, our goal is to learn a fine-grained similarity function that respects the spatial and temporal structures of videos, at the same time. This is achieved with a frame-to-frame function that respects the spatial within-frame structure of videos, and is then used to learn a video-to-video similarity function that also considers the temporal structure of videos. For more information, you can go through the paper or this simple blog post presenting the proposed method. The code and slides are available online on GitHub and SlideShare.

During the poster session, many experts in the fields of image/video retrieval and multimedia processing came by our poster. Most of the discussions focused on the in-depth explanation and the intuition behind our method, the possible extension of our method to related video detection problems (e.g., video copy detection, action localization), the combination or sole use of other modalities (i.e. audio) to perform video similarity calculation, and scalability issues of the present approach. These discussions were inspiring and gave us further ideas to expand our work in the future.

The Media Verification team (MeVer) has extensive experience and expertise in the area of online disinformation with an emphasis on multimedia-mediated disinformation.

Any cookies that may not be particularly necessary for the website to function and is used specifically to collect user personal data via analytics, ads, other embedded contents are termed as non-necessary cookies. It is mandatory to procure user consent prior to running these cookies on your website.